You too a freak? Then join in! Instrumental freak show is a manifesto on diversity. A work by Giovanni Verrando for voice, transformed and invented instruments, video, staging and electronics. Commissioned by Ensemble Interface, funded by the Ernst von Siemens Music Foundation.
More… 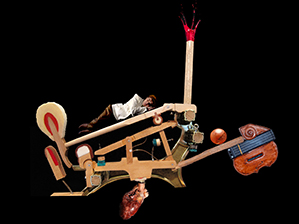 KlangMøbil is a performance, sound installation and concert all in one. The project is the brainchild of a team of international artists dedicated to sound, music and composition. A collaborative process focused on sound production and on its relations with movement: the outcome are the mobile sound sculptures built by Hans Van Koolwijk, which the performers play while in motion.
More… 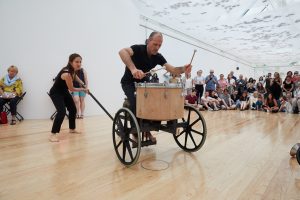 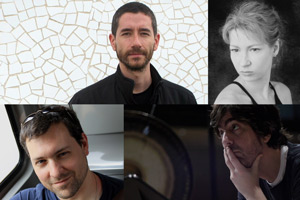 Hunger breaks with operatic conventions by eschewing grandeur and dramaturgical coherence in order to explore the volatile city of one man’s psyche.
More… 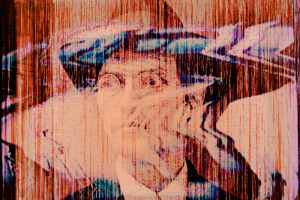 A production of IMD Darmstadt and Wien Modern 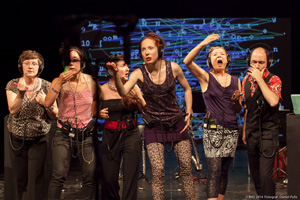 Zwischenzone Ost brings together composers from Eastern Europe with German/Eastern European composers based in Germany, with the aim to open exchange and mutual confrontation between the two sides, bring knowledge and visibility to both parts, reach German and Western audiences with new and rarely performed repertoire from the Oriental scene and vice versa.
More… 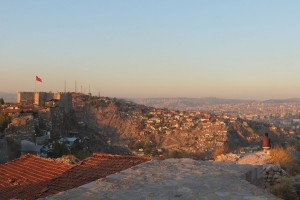 A ‘Music Walk’ in the open with works by John Cage 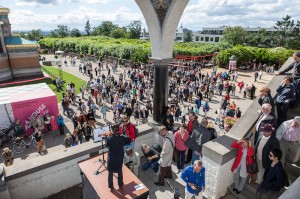 This staged concert connects the radio play ‘Words and Music’ by Beckett and Feldman with recent music works by Pedro Álvarez and Helmut Oehring. The stage design – characterized by everyday objects like cables and loudspeakers – conveys new music as an engaging and challenging experience to children, audience and specialists alike.
More… 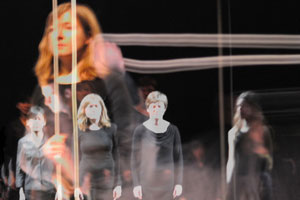